Before Denys Rayner founded Westerly Marine Construction Ltd in 1963 he had designed a number of other boats. There is a genuine constancy of purpose and a true sense of evolution from these earlier designs to the first true Westerlys.

The text on this page describing the Corvette and Westcoaster is an abbreviated version of Simon Baddeley's excellent biography of Rayner. 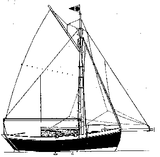 Robinetta is a 4½ ton long keel gaff cutter, built for Rayner at the Rock Ferry yard of the Enterprise Small Craft Company, Birkenhead, and launched on 10 May 1937. Carvel built of pitch pine on oak frames she was built for comfort and ease of handling. Rayner's new wife 'E' insisted on standing headroom and a proper galley. Limited funds meant that waterline length and windage had to be sacrified to achieve the cavernous interior needed to satisfy these requirements. Inspired by Maurice Griffith's 'how to' articles in YM, the cabin extends outward to the sides of the boat. All lines, except the jib halyard, are led to the cockpit and the roller reefing allows easy adjustment of mainsail area. With a crew of two she can be reefed without slowing down. She has been variously described as "A Saucy Little Tub" and "A 30 ft boat on an 18 ft hull". Her construction has been summarised as "never use a piece of 2x4 where a piece of 4x8 will do". From 2011 to 2014 she sailed out of West Mersea. For her 75th birthday in 2012, she was re-caulked, got a new suite of sails by Jimmy Lawrence and a longer an much higher peaked gaff. In 2014 she cruised up the east coast to Orkney, then through the Caledonian Canal and crossed her southerly path from 1938, completing a 76 year widdershins circumnavigation of Britain. 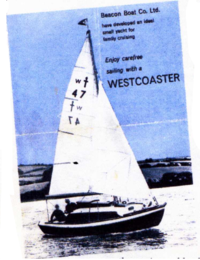 In the late 1950s, a local manufacturer of plywood caravans asked Rayner to design a plywood dinghy to be offered with each caravan. As result of this collaboration Rayner started the Beacon Boat Company at a redundant turnery workshop in Donnington, a village on the River Lambourn north of Newbury.

The Westcoaster was designed initially for a customer wishing to navigate the difficult waters and scarce harbours of the Bristol Channel. It had "sitting head room for tall men" - rare in yachts so small. The reverse sheer needed for such generous accommodation was camouflaged by carrying the decks out to the sides of the boat as he had with Robinetta 20 years earlier. Similarly all the Westcoaster's running rigging came back to the cockpit making her easy to handle single-handed.

Around 60 Westcoasters were built. No 48, at least, survives and as of summer 2014 is being restored to sail. No 60 'Tricia II' was the subject of a Yachting Monthly article in the 1990s and was for sale on eBay in 2013. Sandpiper was seen on the Norfolk Broads in 2006.

The Corvette was Rayner's attempt to build a plywood boat without a hard chine. Although he solved the problem of bending a marine-ply shell in two dimensions, the construction costs were too high to merit production. This focused Rayner's attention on the emerging technology of glass-reinforced plastic (GRP), leading directly to the founding of Westerly Marine.

A 5 ton sloop, the Corvette had hydrofoil sectioned twin keels, flat on the outside and curved on the inside and very slightly toed in. When heeled, the flow over the leeward keel created lift to resist leeway.

Two Corvettes were built. One was Jack Hargreaves' Danica. In 1962 Simon Baddeley and Chris Jameson took her from Lymington through France by river and canal and on through the Mediterranean to Athens, returning via the Bay of Biscay where she successfully weathered F10 gale force winds.

In 2011 a boat claiming to be a Rayner designed Corvette was sold on Ebay.