" Marry a Fulmar by all means but get a Typhoon as your mistress!" to quote The Westerly Owners Association Definitive Guides[1]

The Typhoon doesn't have the usual Westerly roominess and space you would expect from a Westerly of this size, but this is a beautiful boat to sail. Very light on the helm, wonderfully responsive and fast. More than that, it gives that magic thrill when you know you're on a special boat!

Designed to please the racing enthusiast but still accomodate the cruising family the Typhoon is considered by many to be the peak of Westerly achievement.

20 Years hardly rocked, the steering system of our Typhoon must have a total overhaul. One item is the steering pedestal, in particular Hull and bearings an unpleasant grinding noise an unbalanced feeling and a lot of play tells you that there is something wrong inside .Then hurry up!

First you have to remove the pedestal from the cockpit deck. Therefore undock the steering axis from the tiller lever at the underside of the pedestal after having removed the wheel. Then remove the bolt. We brought the column to a farm machinery repair, because the welded tiller lever had to be removed from the central axis of the column by a cutting disk . You cannot dismantle from the top as you will suspect when study the original diagram . File:Lager SteuersÃ¤ule alt.JPG no balls in here !(lower bearing)

the inner parts will be put together with the 2 original bolts(Lewmar stake pin set LE89000072).

Diagrams are shown on the Lewmar webpage. At the web of sailtec.de the german dealer of Lewmar ,you can see the whitlock-range as catalogue and image from 1978 up to the todays produktion.

For the paint job,

we gave the column to a car painter with experience in working with alloy.

Oh how beautiful sailing is, clipping along at 8 knots, enjoying wind and sun, and plucking the sheets from time to time-- great!. Narrow fairways, sand bars, dredgers, cargo ships and many pleasure boaters, however, make quick manoeuvering increasingly necessary on our local area, the Scheldt delta . It's not always fun. Certainly not tacking head on against a SW 5Bft on the Veersemeer (southern Netherlands), when the fairway is twice as wide as the boats length, a Dehler up front and an X in your neck, and the crew (male/female) exceeding 50 ...

A self-tacking jib, is a self-tacking jib, is a jib that tack itself - without waste of power turning the winches. Sounds good. This is standard on many Scandinavian vessels and many new models are completed with it. So I go ahead with my new project- just mount it!!. But I don`t want one of these ugly constructions on stilts. No, certainly not. After some research and discussions with the local sail makers I was convinced: the new construction has to be perfect in shape and tackling work must be easy and safe with a minimum loss of power.

From a piece of our old teak garden bench I laminated a base to the construction. After that , the adjustment is made to the inclination of the mast base and the decks curve .First I thickened epoxy and placed the base to the appropriate place with an auxiliary rail. For the protection of the shipÂ´s deck I used a sheet of plastic, so that nothing spills.

After curing, sanding down and then readjusting Now, fasten the base with the rail to the cabin deck with corresponding pins (40-80 mm). 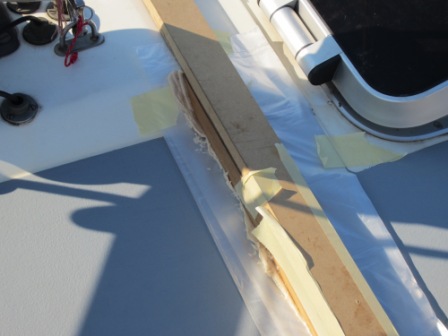 The tack angle is about 8 degrees. Look out for absolute symmetric mounting (measure from the forestay). 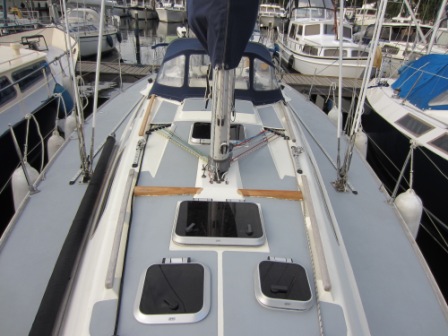 We opted for the rail system of Selden in 30mm. Due to the ball bearing of this system a bending of the rail is not necessary and the rail may be mounted quite flat over deck ,just between the grabrails, so that maximum Sail area is maintained and visual appearance is not affected. 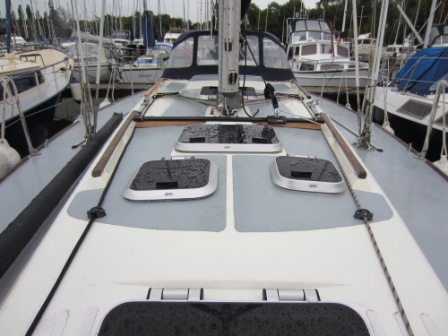 The plain bearing sheet blocks have a breaking load of 3,000 kg, and a 10mm Dynemasheet is led through a new role in the mast ( done by Marco Bijl, Brouwershaven) upwards and then down again via deck organizers to the cockpit.

In combination with a Furlex genoa-furler we now have the right sail for short weekend trips in the Delta. - We chose an Axis Laminate sail from Gaastra again, a well known and experienced Dutch sail maker. 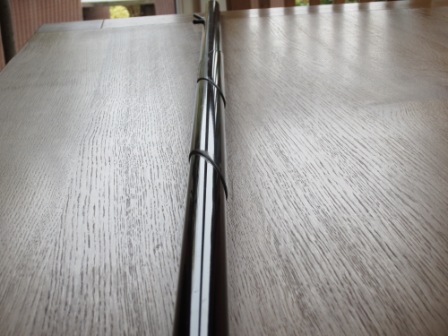 And to compensate the additional weight of all these things, I rigged a carbon made flag pole. However not off the rack (which can be bought for 620,-Euro at every corner) but rather self-made.