Change the oil at the end of the season and replenish with fresh oil. After use oil's ph balance changes and it becomes slightly acidic; this oil may attack the engine's internals if left in place.

Set up a system so that you can run the engine ashore. Some people create a closed loop using a bucket that can be hung at the level of the exhaust to catch the cooling water. The bucket has a hole in the bottom fitted with a hose that can be jammed into the raw water intake. Others use a similar arrangement but attach the hose to the inlet of the water pump. Do not be tempted to use pressurised water from the mains as this can force it's way past the impeller and end up in the cylinders.

Run the engine to get the oil to it's working temperature. Once this is achieved pour antifreeze into the cooling system and let it run round the system. A mix of equal parts water and antifreeze is generally used. This prevents water in the engine block and gear box jacket freezing and also helps prevent corrosion in the engines cooling circuit. On a Centaur with raw water cooling, when the engine is hot and with the engine running, remove the plastic inlet tube from the raw water inlet sea cock. Insert the tube in a can of antifreeze and allow the water pump to empty the can. Stop engine as soon as the can is empty. Re-attach the tube to raw water sea cock.

The engine can now be stopped and the oil removed. This can either be done using the sump plug or a suction pump (like the PELA 6000) deployed through the dip stick housing. If using the former method toddlers disposable nappies are a great way of mopping up any oil spills. Accessing the sump plug is impossible on some engines.

Once the new oil is added to the correct level all air intakes should be closed off to prevent moist air entering the engine, condensing and forming pin pricks of corrosion inside the engine. This normally means an oily rag or cling film over the exhaust and air filter.

Lastly, fill the diesel tank as full as possible to prevent condensation and the growth of the "diesel bug" in the fuel tank.

Pump white vinegar (leave overnight) then pump disinfectant through the heads outlet. Leave seacocks open and drain toilet bowl. Undo outlet pipe and mop up water from behind Joka valve. Leave Jabsco flush select lever in the wet position to avoid it taking a set over the winter.

Drain this down to prevent freezing. Disconnect pumps and filters. You may want to use cleaning tablets at the start of the season and change any in-line filters.

Ensure your batteries are fully charged. You might want to hook up a trickle solar battery charger to keep them topped up over the winter.

An ex-lorry tarpauline can completely cover your Westerly over winter and the contents will stay dry which will ensure that mildew smells can't get a hold. Construct a wooden framework to support the tarpauline and support the framework with guy ropes. However, do bear in mind that in high winds tarps can flog and create a racket so if there are homes nearby make sure your tarp is well tied down. Ropes locked around the keels can stop the tarp from rotating around the boat. 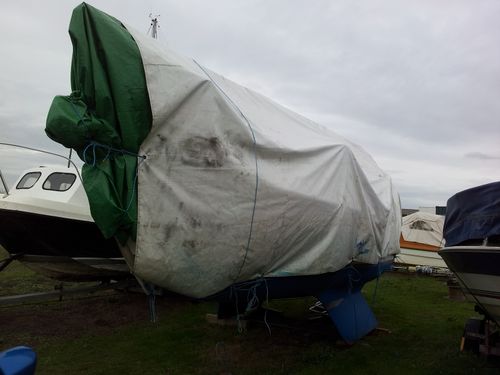